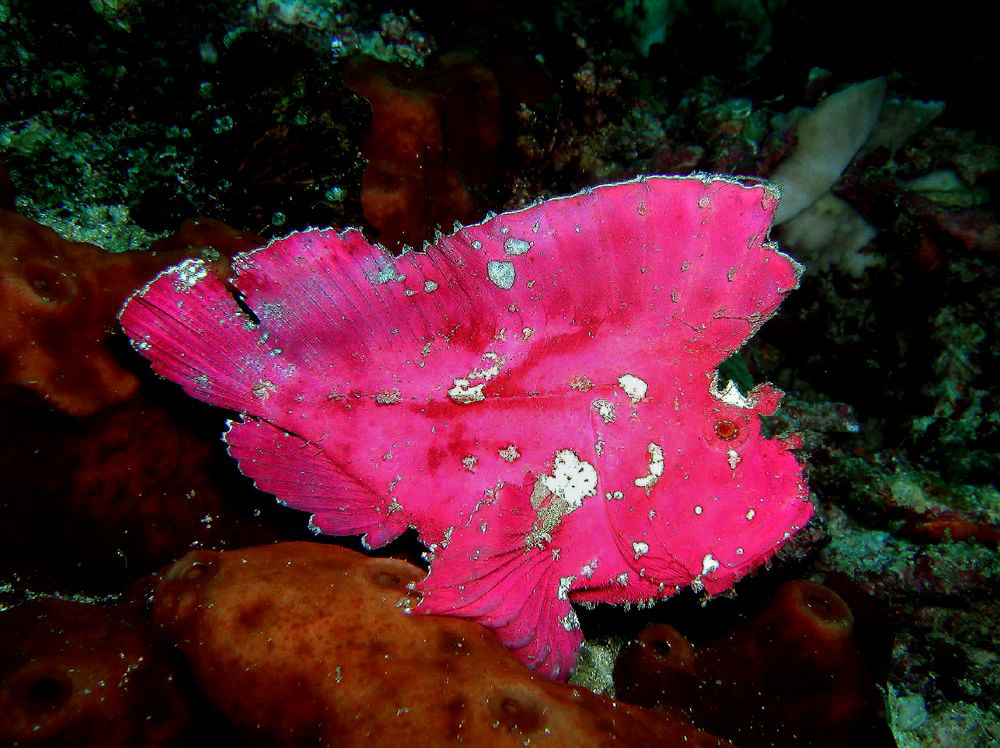 Diving depths at Kapalai range from 5 to 18 metres, you’ll find a sandy sea floor with some blocks of coral growth and a few sloping reefs. The visibility in the area is between 5 and 15 metres which is perfectly suited for muck diving. 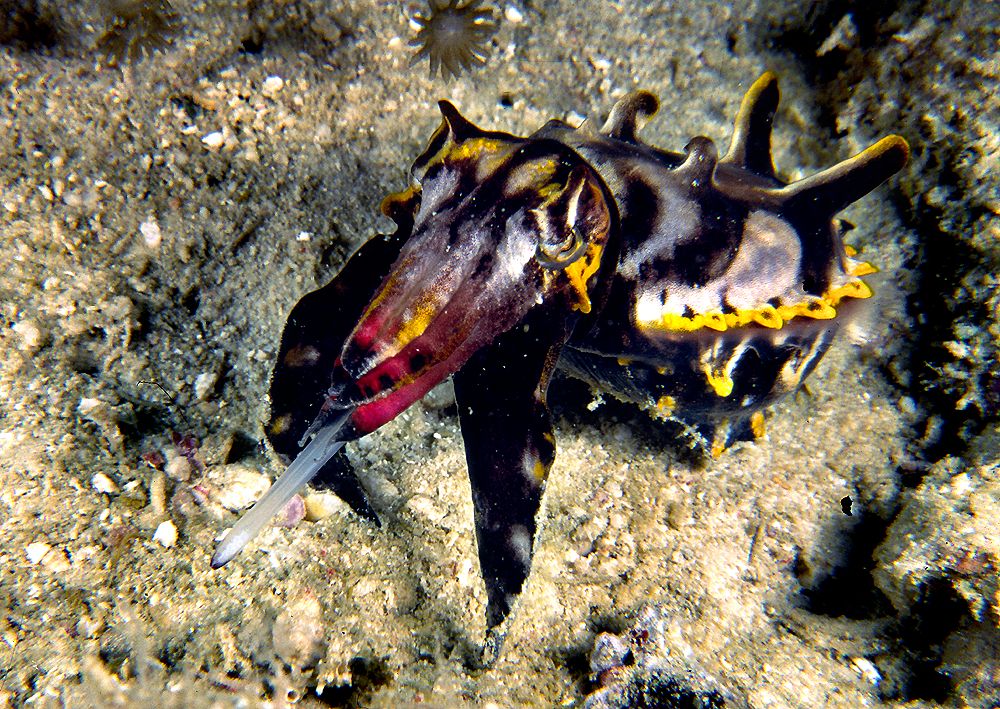 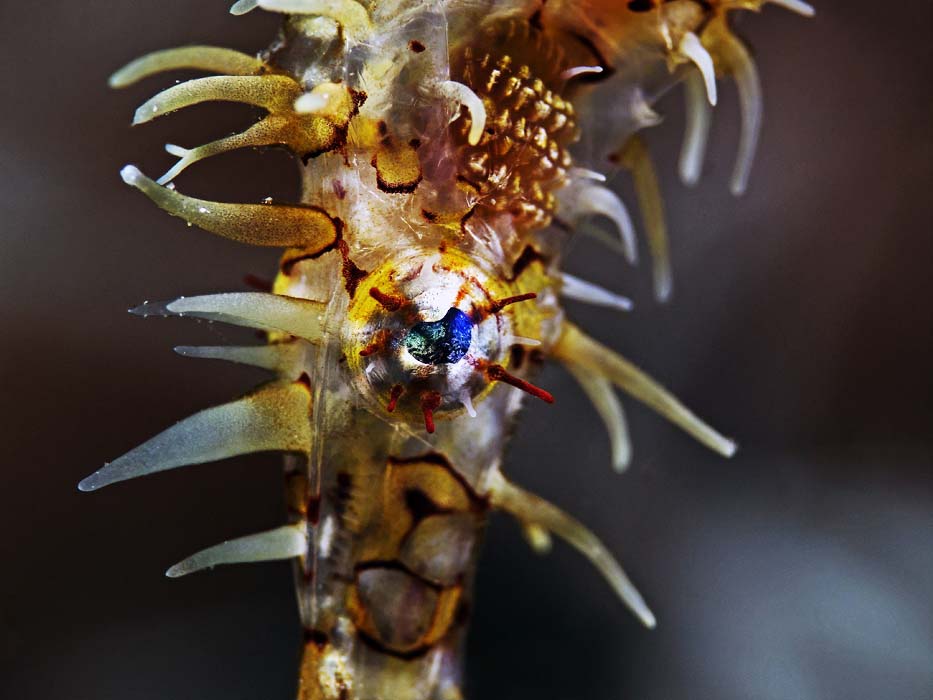 There are so many crazy critters to be found at Kapalai, it’s often a good idea to familiarise yourself with what many of the creatures look like before you jump in. These craft critters can be notoriously difficult to spot, even when a dive guide or dive buddy is pointing right at them.

The list of critters to be seen at Kapalai is near endless and includes nudibranches, ghost pipefish, scorpion leaf fish and many more. These truly incredible creatures often remain hidden in the nooks and crannies of the reefs, so be sure to keep alert and remind yourself not to only look into the blue to spot the marine life.

Look out for frogfish, mandarin fish, ghost pipefish and crab eye gobies. The blue ringed octopus and the wonder octopus, both masters of disguise, may be hidden in the nooks and crannies of Kapalai, and a few of the interesting-looking cuttlefish varieties such as the flamboyant, Papuan and reaper cuttlefish have been known to make an appearance too.

Pictures of the above-water scene at Kapalai are instantly recognisable thanks to its beautifully designed water village resort that appears to float above the water, making use of stilts to secure the individual chalets and walkways to the sand bank below.

A 100 years ago, Kapalai was a tropical island much like Pulau Mabul, it has now become a small sand bank which surfaces at low tide. It is this unique environment which makes it the perfect nursery for a huge variety of marine species. 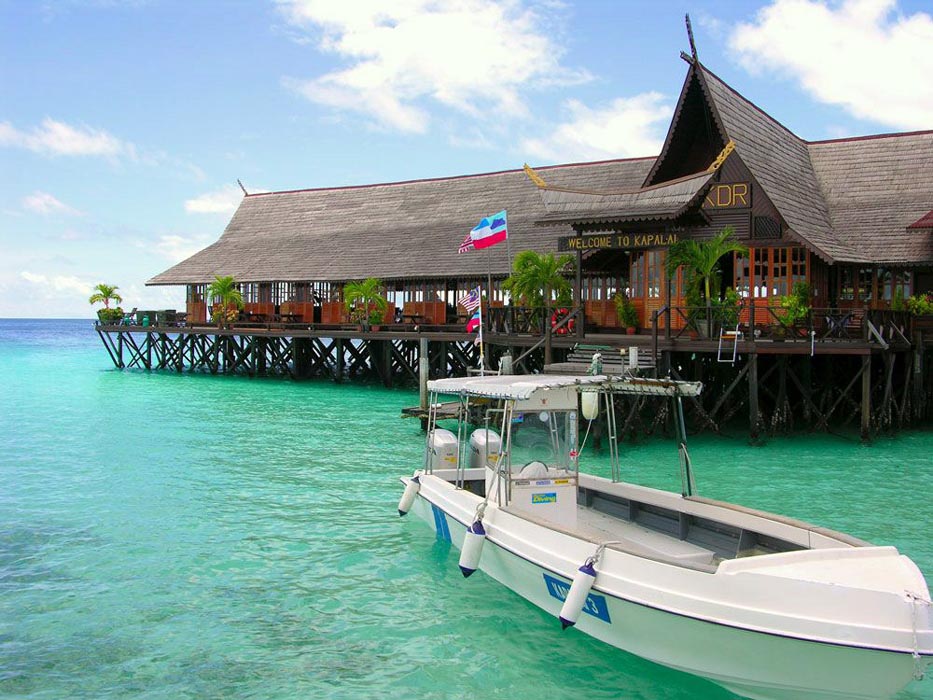 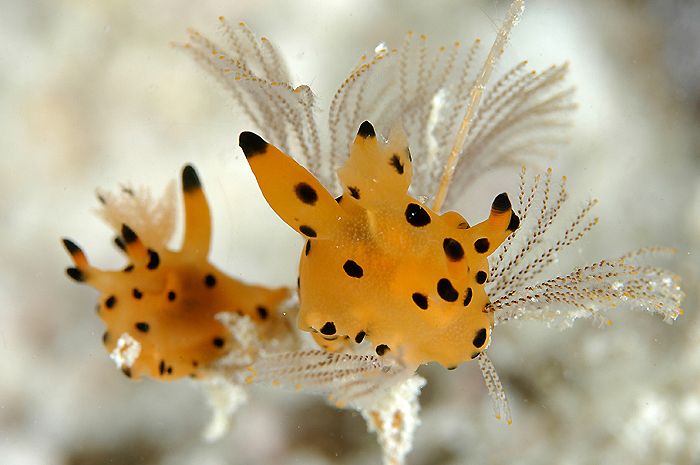 Under water, the scene is quite different. For the critter lovers, Kapalai is known as muck diving heaven, especially since the visibility is often so much clearer than at nearby Mabul.

The waters beneath the Kapalai resort are teeming with life thanks to a few artificial reefs specifically created to encourage coral growth and conserve the flourishing eco-system. Large metal frames, sunken boats and special structures all lie beneath the surface at Kapalai, and you’ll see the marine creatures don’t even bat an eyelid to these foreign objects. In fact, you might have a hard time spotting the camouflaging frogfish against the man-made metal reefs.

An artificial reef is generally the result of a man-made item landing on the sea bed by mistake, either caused by a disaster such as a ship wreck or from cargo ships losing pieces of machinery and other such instances. At Kapalai, the artificial reef has been purposefully designed in order to attract marine life and encourage eco-system growth. With many different components to the reef, each attracting a variety of critters, Kapalai is a diving haven worth well worth exploring.

The entrance to the Kapalai House Reef is a grand affair, extremely impressive underwater although it doesn’t attract too much life. The house-like frames further along the reef are impenetrable for divers, making them the ideal spot for fish to hide out as they would usually do below a crevice or ledge. Many sweetlips can be seen hanging out between the frames.

Divers can spend a good deal of time exploring the Kapalai House Reef which stretches from 5 to 21 metres and is conveniently located right in front of the Kapalai Resort.

Mandarin Valley is a relatively shallow dive site that consists of a sloping reef and a sandy floor. The gentle currents and excellent visibility (often up to 35 metres) make the conditions ideal for a beginner diver looking to explore some of the smaller and lesser-spotted marine life. Like all sites at Kapalai, Mandarin Valley boasts an abundance of rare creatures and invertebrates that live in peace away from larger predators. The nearby reef of Ligitan even acts as a nursery for juveniles to grow.

As you descend into the warm water, be sure to go slowly enough so you can catch a glimpse of the well-camouflaged frogfish and stonefish that might be quietly watching you from the coral slope. Once on the sea floor, cuttlefish are a common sighting and many divers are amazed by the reactions these flamboyant creatures have to their movements – the cuttlefish put on a colourful camouflage display that would rival our modern day fireworks. This interesting creature’s skin visibly pulsates, flashing different colours in response to the divers’ movements and it is truly something that needs to be experienced rather than read about.

Divers will often find these creative and colourful creatures making use of the fishing boat wreck nearby for shelter. Lying at a depth of 18 metres, this small boat is a hive of underwater activity and has many interesting residents that make perfect subjects for underwater photographers – crocodile fish, nudibranchs and longnose hawkfish to name just a few. A number of different coloured ghost pipefish can be seen including the bright orange/red variety.

Divers at Mandarin Valley should also look out for squid, a cousin species to the cuttlefish, which swim by in impressive-sized squadrons. In keeping with the colourful, the vibrant dancing mandarin fish forms a fantastic contrast against the black sea urchins which lie just over the channel together with corals, sponges and plenty of tiny critters for macro divers to rave about. Once the sun has set, crayfish and sharks can be seen, adding to the immense variety of species that Mandarin Valley has to offer.

Mandarin Valley’s shallow sloping reef stretches from 8 to 20 metres in depth and its warm waters can reach up to 30°C during some parts of the year. Surface conditions and currents are generally calm and ideal for beginners; however the surface can get a bit choppy at times. Visibility is often in the range of 20 to 35 metres, making Mandarin Valley a brilliant dive on almost any day.

The Black Ray Channel, as the name suggests, is a sandy channel in Kapalai with depths of between 5 and 20 metres and water temperatures in the bath-water region of 25 to 28°C.

A wide variety of marine species call these warm waters home including ghost pipefish, ribbon eels, lavender frogfish and stonefish. With fantastic visibility up to 30 metres and plenty to see in every nook and cranny, you’d have to really try hard not to spot some underwater wonders in Kapalai’s Black Ray Channel. With little current to speak of and fairly calm surface conditions most of the time, this site is ideal for beginner divers.

After exploring the channel, dive guides will generally lead divers to an underwater garden rich with small marine life including exotic finds such as the tropical octopus and a number of rare nudibranch species. For many divers, the main draw to the Black Ray Channel is the chance to see pairs of dragon fish – distinctive, bony armoured sand dwellers that are brilliantly camouflaged and often very difficult to spot.

With strong currents and a depth of 25 metres, Mid Reef is a site best left to the advanced and more experienced divers who are comfortable going down using a ball line.

Many divers explore Mid Reef very closely, hoping to catch sight of the tiny pigmy seahorses that can be found here.

Gurnard Point is a unique site which gets its name from the peacock-like flying gurnards that inhabit the area. Located just beside the Police Jetty, this reef boasts a small but highly popular wreck where moray eels and giant frog fish tend to spend their time.

A sandy plateau is home to sting rays and is also where you might find the flying gurnards.

At depths of between 5 and 20 metres and visibility between 15-30 metres, Gurnard Point is also suitable for snorkelling. 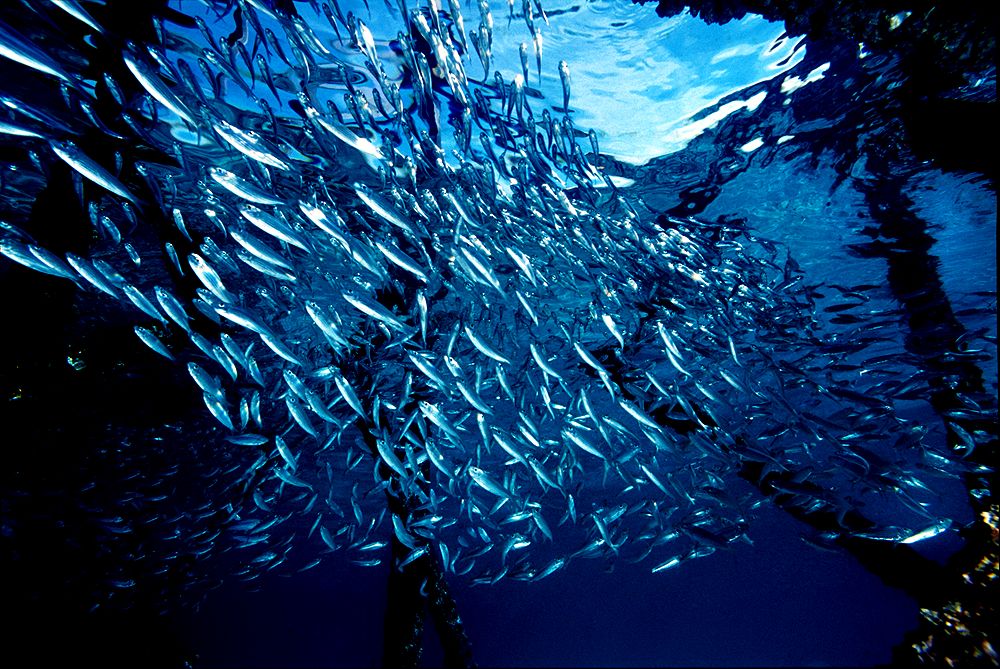 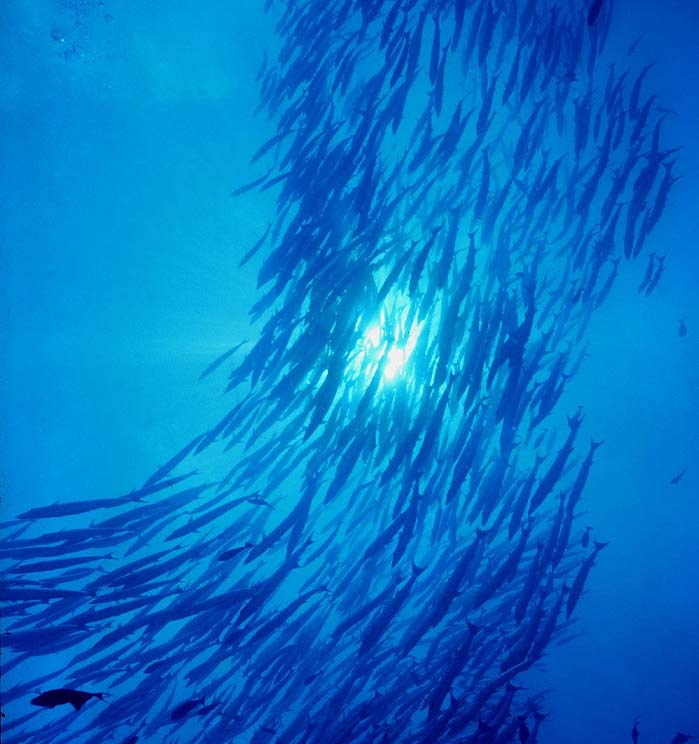 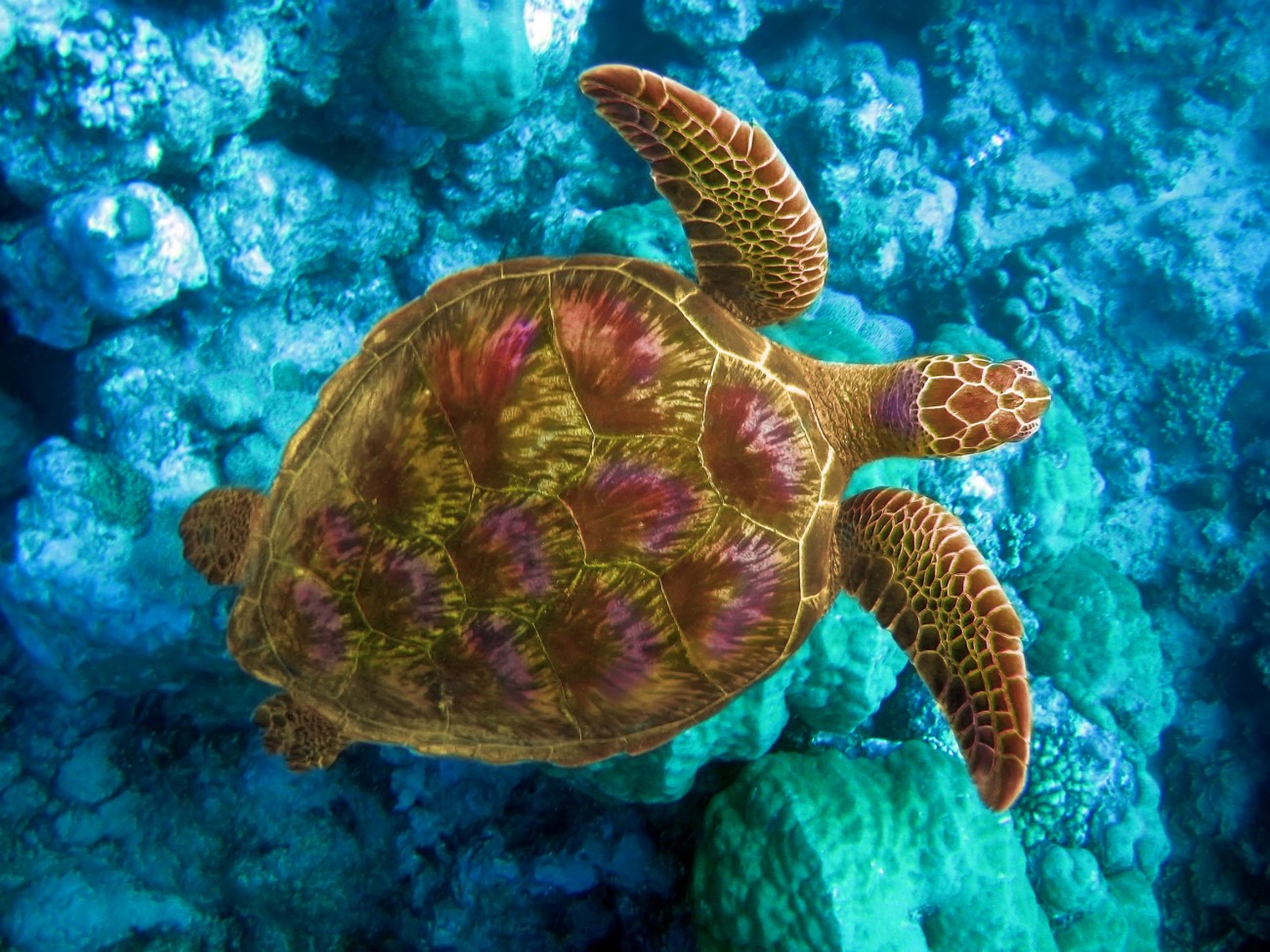 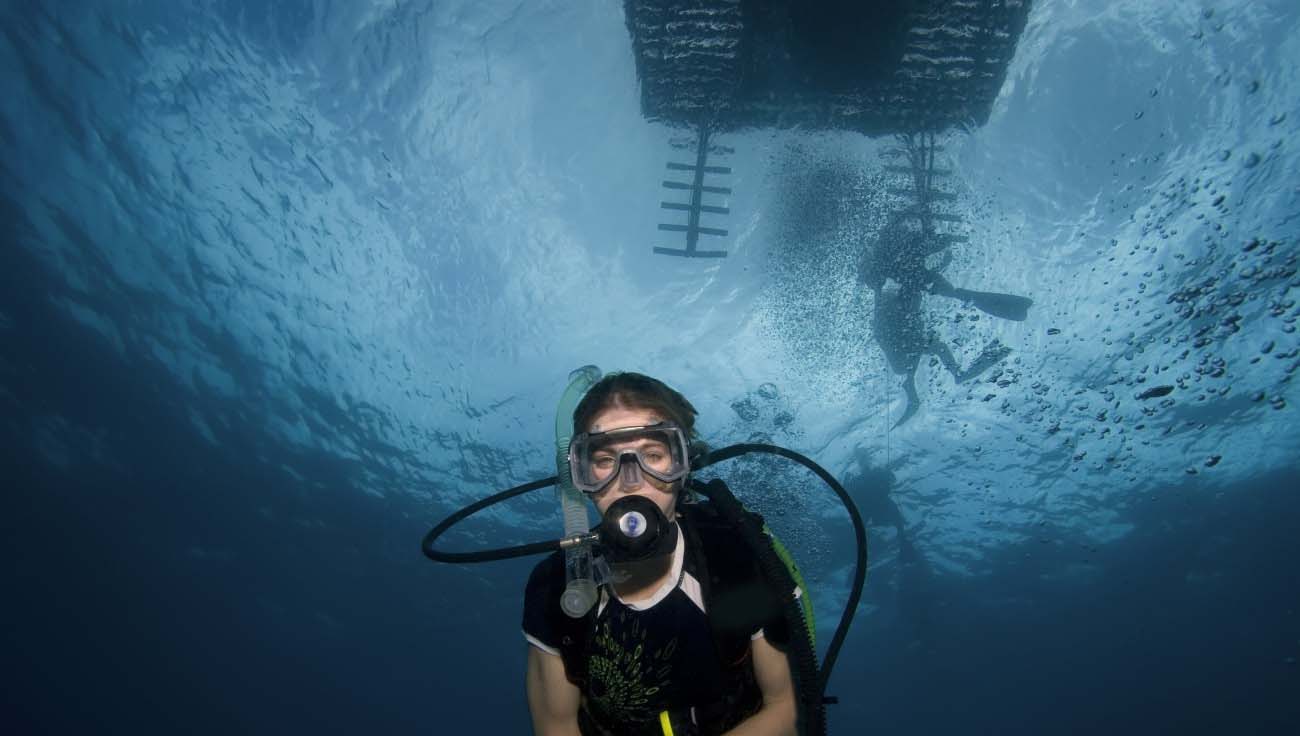 We stayed at the Mabul Water Bungalows on Mabul island and went muck diving to Kapalai which is just 5mn by boat.

China
Kapalai was an absolutely amazing experience with so much rare macro marine life to photograph.

USA
The diving was superb and more than we ever could have asked for - I cannot recommend this dive site highly enough!

Let us handle your diving holiday to Sipadan and Kapalai.
We will send you the best prices and latest offers.